During 2018, the Turkish lira depreciated significantly due to the negative impacts of a tightening US monetary policy, high levels of foreign exchange debt in the private sector, rising current account deficit, and political tensions with the United States. The spillover of the lira’s depreciation will continue to weigh negatively on the economic performance in 2019. Because of the Turkish economy’s structural dependence on imported inputs for its activity, the weakness of the lira has significantly raised production costs and deteriorated pricing behaviours. After closing to 50% on an annual basis in the third quarter of 2018, the rise in producer prices will continue to be passed onto the consumers. However, the slowdown of the domestic demand will not allow a complete pass-through, meaning that already-tight profit margins will be narrowed even further. Coupled with higher funding costs (interest rates on loans hit nearly 40% after the central bank’s 625 basis points rate hike in September 2018 as a reaction to the lira’s depreciation), these factors are expected to result in a higher number of companies seeking for debt restructuring, thus dragging down private investments. Moreover, manufacturing output has started to lose pace, a trend which is expected to continue in the coming quarters. On the household consumption front, real wages are expected to remain under pressure, as salary increases are expected to remain mostly below annual inflation. This will affect consumption-depending sectors, such as retail, construction, and electronics. Higher interest rates will undoubtedly reduce the pace of growth of domestic demand. In order to support the economy, the government has implemented some measures, such as the extension of credit card instalments, and several incentives targeting the private sector, such as the government’s decision to postpone to 2019 the payments which were supposed to be collected from the SMEs in 2018 as a part of the financial aid they received from the government, as well as export aid of up to TRY 300,000 for SMEs, and encouragement for the local production of the intermediate goods that exporters currently import from abroad, among others.

The slowdown in domestic demand is expected to weigh on tax receipts, as nearly 65% of total fiscal revenues are in the form of indirect taxes. Although the government has announced a total saving of TRY 60 billion (nearly USD 11 billion), the sharp slowdown of the economy will put pressure on the fiscal stance by pushing the government to introduce some incentives to prevent a systemic risk resulting from payment delays and debt non-payments in the private sector. Public savings would be made on capital investments, social security, and purchases of goods and services, according to the New Economic Plan 2019/21.The fiscal consolidation may be also hampered by upward pressures resulting from rising costs of public-private partnerships in relationship with the public guarantees provided to private investors over their operating income. Nevertheless, the low level of public debt gives the government some scope for action. Conversely, the lira’s weakness is expected to support Turkish exports (automotive, food, clothing, textile, machinery, metals, etc.), which are already benefiting from the growth in Europe, Turkey’s main trading partner. Tourism revenues are set to increase, as Turkey has become a more affordable destination for international tourists thanks to the lira’s depreciation, and the security environment is more stable. On the other hand, subdued household consumption and private investment and slower manufacturing production will moderate import demand. Therefore, the trade deficit and, consequently, the current account deficit are expected to narrow in 2019. Private sector external debt will continue to represent a challenge. Total external debt hit 52% of GDP as of the second quarter of 2018. With lower available external financing, the Turkish private sector could turn into a net debt payer.

Although President Recep Tayyip Erdogan’s Justice and Development Party (AKP) was only able to secure 295 of 600 seats in Parliament, it managed to form a majority with the conservative nationalist MHP party. With the concomitant re-election of Mr Erdogan in June 2018, political noise has diminished. The country will hold local elections in March 2019. Any increase of the political and/or geopolitical tensions ahead of the election would weigh on the economic dynamics, which are already fragile – although this seems to be an unlikely scenario. 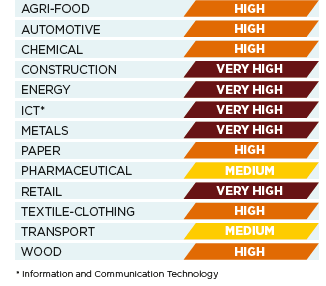 Traditional credit payment instruments are still in common use in Turkey’s domestic market, as they often serve as negotiable instruments. This is the case for promissory notes, a solution regularly used by SMEs for commercial transactions. Similarly, post-dated cheques serve as both a title of payment and a credit instrument. Cheques circulate in the domestic market as negotiable instruments until their maturity date. An amendment, which came into effect on the July 15, 2016, imposes a punitive fine on the person responsible for a “dishonoured cheque”. If the fine is not paid, the punitive measure can be transformed into a prison sentence of up to 1,500 days. In such cases, neither settlement nor prepayment are executed. In addition, the drawer of a dishonoured cheque is subsequently banned from drawing cheques or opening cheque accounts. After payment of cheque amount or ten years of the court decision, a ban shall be removed. Although banks are now required to exercise greater vigilance with regard to the profiles of their clients, the law also provides for large financial sanctions, which are payable by the drawer of the cheque in cases of non-payment.

The SWIFT electronic network is well-established in Turkish banking circles and constitutes the most commonly used instrument for international payments.

Amicable procedures, which involve the sending of a formal notice to pay, followed by repeated telephone calls, remain a relatively effective method. On-site visits can also pave the way for restoring communications between suppliers and customers, thereby enhancing the chances of completing successful negotiations. The civil procedure code specifically states that the judge may at any time during legal action encourage the amicable settlement of the dispute, provided that it results from a real desire by the parties to seek an out-of-court settlement via a negotiated transaction.

The Law on Mediation in Civil Disputes stipulates that mediation shall be applied only in the resolution of private law conflicts arising from acts or transactions of interested parties who have the capacity to settle such conflicts. The parties are free to apply to a mediator at any time, in order to continue, finalise or abandon the process.

Depending on the debtor’s solvency, the terms of the transaction can range from payment in full, to repayment by instalments, to a partial payment as final settlement. In the absence of a voluntary settlement, the threat of a bankruptcy petition (iflâs) is a frequently employed tactic to elicit a response from the debtor and prompt them to pay the arrears.

Negotiable instruments, such as bills of exchange, promissory notes and cheques, enable creditors (without obtaining a prior ruling) to directly approach the enforcement office (Icra Dairesi) for serving the debtor with an injunction to pay. They can then, if necessary, proceed with the seizure of the debtor’s assets. Seizure is a process that begins with filling an order for payment, which is then served to the debtor. If there are no objections to the order, the assets of the debtor are liquidated to cover the claims. If the order is not accepted by the debtor, he has the possibility to request that the creditor proves the claim in court. The debtor has ten days to settle the arrears in question, or five days to approach the enforcement court and oppose payment on grounds that, for example, the signature on the document is not his own, or that the debt no longer exists. If the opposition is deemed to be abusive, the debtor is liable to large penalties.

Litigation procedure – examined by the Court

If the pre-legal procedures for the collection of the debt from the partner/supplier fail, a lawsuit can be brought against the debtor before commercial courts. The commercial court (asliye ticaret mahkemeleri), which is a specialised chamber of the court of first instance, is competent to hear commercial disputes and insolvency proceedings. In cases where the validity of the claim is disputed, the only recourse is to initiate ordinary proceedings, via a summons, to appear in court.

If Turkey has not signed a bilateral treaty or a reciprocity treaty with the plaintiff’s country, the plaintiff is required to put up a surety bond, judicatum solvi, with the competent local court. This amount represents approximately 15% of the claim. The same pertains to Turkish applicants with no permanent residence in Turkey. At the end of the litigation procedure, the security deposit is refunded to the creditor by the court.

Ordinary proceedings are organised into three phases. The first involves position statements from each party (a statement of claim and a statement of defence). In the second and lengthier phase, the court investigates the case and examines the relevance of the evidence submitted, to see whether it is conclusive or discretionary evidence. Finally, in the main hearing that constitutes the third phase, the court hears both parties and their lawyers before issuing a ruling.

Enforcement of a Legal Decision

The debtor will designate some or all of its assets for its creditors, propose that those assets are sold (or transfer to third parties), and that the proceeds of the sale should be distributed to creditos. A debtor wishing to restructure (or a creditor having the right to institute bankruptcy proceedings) may apply to the competent execution court with a reorganisation project. If the execution court determines that the project is likely to be successful, it will order a creditors’ meeting to decide whether they accept the reorganisation project. If approved, the project will then be submitted to the court for approval. If the court determines that reorganisation will be more lucrative than bankruptcy, it will approve the project.

The new EBC provisions encourage the debtor and its creditor to reach a voluntary arrangement to rehabilitate the distressed but still viable business. The contents of the proposal enter into force after acceptance by the creditors and approval of the court. However, creditors have the right to apply to the court for relief if the debtor does not fulfil its obligations under the project. The court has a right to declare the debtor bankrupt following any non-compliance. Restructuring is only available for companies and co-operatives with the exception of banks and insurance companies.

The creditor begins this form of proceeding by requesting the execution office to serve on the debtor an order to pay for a due debt. The debtor has seven days after service in which to dispute the debt or pay. If the debtor fails to pay or dispute the debt, the creditor may apply to the commercial court for a bankruptcy order, which the court will generally grant.

The bankrupt loses control of its assets and only the administrators have the authority to dispose of assets in the estate. If the bankrupt has no assets, the value of the assets is insufficient to cover the costs of the proceedings or the creditors are not prepared to put up the costs, the bankruptcy may be suspended.

A first meeting of creditors is convened, during which are appointed three bankruptcy administrators, and it is considered whether it is appropriate to propose an arrangement. A second meeting of creditors is to consider the delay and manner of the disposal of the bankruptcy estate (often by public auction), then to fix the order of priority for the creditors who have lodged their claims.