Asia Corporate Payment Survey 2016: Tail risks are on the rise

“2017 is set to be another challenging year, riddled with increasing global uncertainties linked to China’s deceleration. This will be compounded by the fiscal challenges experienced by commodity exporting countries and monetary policy tightening in the U.S. Taking all of these factors into consideration, overall company payment experience in the eight selected regional economies is likely to remain weak” said Carlos Casanova, Economist for Asia Pacific at Coface.

64% of the companies surveyed experienced overdue payments in 2016. Overdue payment risks appear to be continuing to increase, across the region. The average number of overdue payment days lengthened in 2016. There was a significant increase in the proportion of respondents experiencing overdues exceeding 120 days, up from 8.2% in 2015, to 12.5% in 2016. 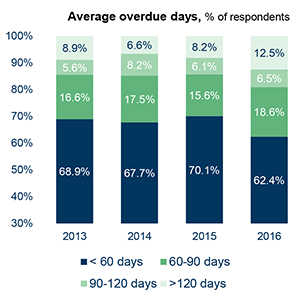 In 2016, a greater number of respondents (25.8%, vs. 24.2% in 2015) suffered from ultra-long overdue amounts that exceeded 2% of their total annual turnover  . On a more granular level, the data reveals that the situation has been steadily worsening, in terms of companies with ultra-long overdue amounts equivalent to, or exceeding 10% of their total annual turnover. This percentage has risen up from 3.4% in 2014 and 5.1% in 2015, to 5.4% in 2016, resulting in significantly reduced cash flows for companies. 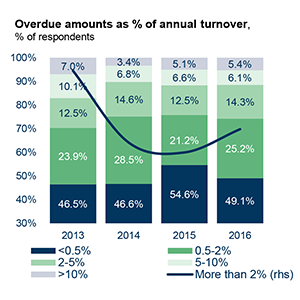 While the situation deteriorated across the region, some geographical differences were apparent. The most noticeable increase in non-payment risks was noted in China, followed by Thailand and India. More companies in Australia (14%) and Japan (9%) reported ultra-long overdue amounts exceeding 2% of their annual turnover - but these still represent a relatively low level. Improvements were observed in Singapore and Hong Kong, while Taiwan remained stable.

Overdue issues intensifying in half of the analysed sectors

Construction remained the riskiest APAC sector in 2016. The percentage of respondents registering ultra-long overdues exceeding 2% of annual turnover, at 33%, was the highest amongst all sectors in Coface’s survey. Headwinds originating from the economic slowdown in China, combined with uncertainties surrounding monetary and fiscal policies in the U.S., are likely to weigh on the region’s economic outlook. This is dampening confidence for both private investment and consumer home purchases. In addition, household debt remains high in some APAC economies (such as Australia, Thailand, Singapore, Malaysia and South Korea). This could reduce the capacity for home purchases, especially if interest rates increase on par with the U.S. Fed. Public infrastructure investments in some regions will help to cushion the construction sector against a steeper decline in 2017.

Closely following construction, industrial machinery & electronics was the next most vulnerable sector in 2016. However, the percentage of respondents registering ultra-long overdues exceeding 2% of annual turnover remained high in 2016 (32%). This points to fat tail risks for industrial machinery & electronics, with 2017 likely to be another difficult year for the sector. Pro-cyclical factors point towards dormant demand for the remainder of the year, due to a deceleration of activity in China and weaker capital spending in APAC. Signs of saturation in China and significant market fragmentation will increase competition. Furthermore, the return of deflationary pressures in APAC’s main markets, including China (where producer price inflation has been slowing since February), could further squeeze margins.

Non-payment risks appear to have deteriorated for the IT-Telecoms sector, as a higher percentage of respondents experienced an increase in overdue amount (32% in 2016, vs. 29% in 2015) and ultra-long overdue issues (31% in 2016, vs. 21% in 2015). Public infrastructure investments in some APAC economies, as well as strategic megaprojects such as China’s Belt and Road initiative, will generate additional demand in the years to come. This will provide welcome relief, particularly for telecoms. Nevertheless, acute market competition in the IT sector, coupled with deteriorating liquidity conditions, will most likely foster an environment conducive to M&A activities in 2017.

While metals remain one of the riskiest sectors, its performance in 2016 was boosted by a recovery in commodity prices. The metals sector will probably continue to face challenges in 2017. China’s economy has started to show signs of deceleration and the authorities are implementing measures to cool housing speculation and demand. This could translate into a relapse of lower metal prices, which will almost certainly impact margins. Restructuring in this sector is likely to continue, following on from the merger between Baosteel and Wuhan Iron and Steel in 2016. Closures of China’s zombie enterprises in the steel sector and a rise in M&A activities are expected for 2017.

[2] According to Coface’s experience, roughly 80% of ultra-long overdues will not be paid at all. When over 2% of total annual turnover is tied up in ultra-long overdues, a company may encounter cash-flow shortfalls if non-payment risks materialize, leading to tighter liquidity and financial difficulties. 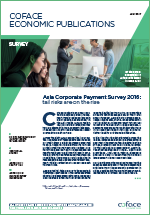 
Do you know the impact of an unpaid invoice? Learn more »