Corporate insolvencies in France: microenterprises in the trough of the wave

While the yellow vests movement did have a strong impact on corporate insolvencies at the beginning of the year, the decline in mobilization and the resilience of economic growth had a positive impact on the health of French companies in March and April.

Coface reports on business insolvencies from January to April 2019. Their number increased by 0.8% over this period (to 18,227).

However, it should be noted that two periods can be distinguished with the beginning of the year marked by the gilets jaunes (yellow vests) movement. The month of January saw the number of company shutdowns increase by 9.3%. March and April proved much better, with declines of about 4% compared to 2018.

More and more new companies are being created

If we take into account micro-entrepreneurs, the number of companies created in France during the first four months of the year reflects a certain economic dynamism. Indeed, no fewer than 265,827 companies were created, an increase of 19.5% over the year. Excluding self-employment, the increase remains significant at 10% with 137,571 companies created.

Nevertheless, Coface expects these good figures to have a significant impact on the future number of insolvencies since one in two companies will no longer be active five years after its creation with an average age of insolvencies around 81 months.

Particularly impacted by the economic slowdown at the beginning of the year, microentreprises, which represent 83% of insolvent companies, are the only category to register a rise in insolvencies. The personal services sector also suffered, reflecting the lower confidence of French households (5 points below its historical average), in line with their expectations in terms of unemployment and purchasing power.

Overall, only the construction and agri-food sectors are doing well. All other main sectors are seeing a further increase in insolvencies, which, according to Coface's forecasting model, are expected to increase by 1.7% over the entire year 2019. 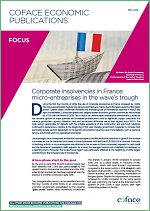 Download this press release : Corporate insolvencies in France: microenterprises in the trough of th... (139.86 kB)