Corporate overdue payments in China at high levels: 80% of corporates affected in 2014

A new Coface survey[1] on corporate credit risk management in China reveals that8 out of 10 corporates experienced overdue payments in 2014. Coface,a leading global credit insurance group, forecasts that GDP growth will slow down to 7% in 2015 (vs 7.4% in 2014). As corporates are still facing the challenges of high leverage, the high cost of financing and low profitability (driven by overcapacity), it is expected that non-payments will not improve in the short term.

Corporate overdues and NPL [2]: the risk of rising non-payments should not be overlooked

79.8% of the companies interviewed in the survey reported overdues in 2014. This is a slight improvement compared to 2013, although they have remained at high levels for the last three years (Appendix 1). Among those surveyed, more than half (56.7%) saw an increase in overdue amounts over the past year, up 11.7% compared to 2013(Appendix 2). In terms of the length of overdues, 19.6% of respondents reported that the average overdue period exceeded 90-days in 2014, while only 17.8% had the same experience in 2013. The findings showed that, overall, payment in China remained very challenging in 2014.

This is in line with the non-performing loan (NPL) figures released by the China Banking Regulatory Commission. The NPL ratio rose to a multi-year high of 1.25%, as at the end of 2014. The risk of rising non-payments should not be overlooked.

“While the NPL figures are seen as lagging indicators, they show the tough situation the Chinese economy is facing. This is confirmed by the payment behaviour revealed in Coface’s annual survey” said Rocky Tung, Economist for the Asia-Pacific region. “NPL soared by 42.3% YoY, as of the end of 2014, led by the substantial increase of 58.8% in substandard loans[2].These trends show that risks are on the rise, involving both the real economy and the financial system.”

Slower growth in 2015 expected by nearly 62% of companies

China’s 7.4% YoY GDP growth registered in 2014 was the slowest growth rate in the last 24 years. Momentum is on a downwards trend. Coface forecasts that GDP will grow by 7% in 2015. In January 2015, Coface placed a negative outlook on China’s A3 Country Risk Assessment (CRA)[4], reflecting the weaker economic momentum, high leverage, the high cost of financing and weaker payments in the country.

Since the second half of 2014, it has been observed that the government considers that the economy is moving in the right direction - combining stable job growth with modest inflation. However it is in the government’s interest that the property market does not continue to deteriorate – as ‘land usage right transfers’ are a major source of funds for the government (28.2% in 2013). As China is on pace to add over 13 million new jobs, inflation is expected to stay low (Coface forecasts 2.2% YoY for 2015). The property market is showing early signs of stabilization since the government removed purchase restrictions in all but 5 cities and the introduction of monetary easing measures (interest rate cuts in November 2014 and required reserve ratio reductions in February). Our 7% growth forecast is in line with the government’s rhetoric. This will not come as a surprise to corporates in China, as 61.7% of respondents believe that GDP growth will continue to slow down in 2015 (Appendix 4).

At the same time, the real economy in China is facing rising challenges in three major areas:1) high leverage; 2) high costs of financing, 3) low profitability driven by overcapacities in certain sectors.While monetary easing measures are being introduced to smooth out the growth deceleration process, if additional low cost funding is not delivered to the parties that need and deserve it, the main purposes of such monetary easing measures are unlikely to be achieved, and further concerns on rising credit pressure would be foreseen.

“Non-traditional measures that could help ease the liquidity glut in the real economy – particularly for small-and-medium enterprises (SMEs) – are underway, but patience is needed when Chinese policymakers are leading structural and financial reforms. For example, the approval of private-funded banks will serve the needs of SMEs, but the setup of these banks has taken some time following approval. We will need to give it further time before fruitful results can be achieved in the medium-term” said Rocky Tung.

Short term challenges are expected to continue in 2015 for businesses in China. Coface assessed 9 major sectors in the Chinese economy, from the perspective of their payment experiences and financial performances. 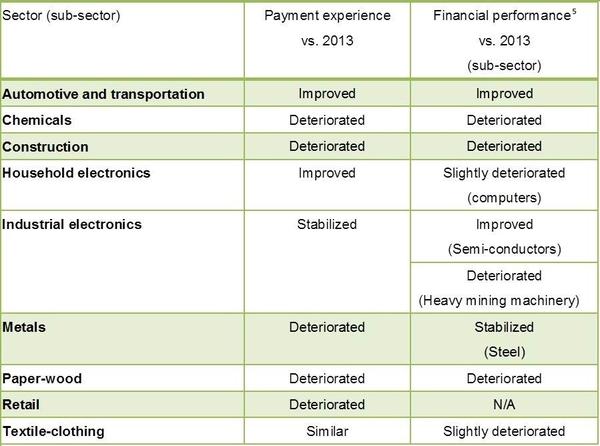 With the economy slowing down, industry participants need to adapt to slower growth in demand in general and to seek new growth drivers. With the high debt levels in China, there is a crucial need for the costs of financing to come down. Showing signs of deterioration in both payment experience and financial performance, risks in chemicals, construction and paper-wood sectors are on the rise, while the metals sector remains a source of concern in China.

Coface has been conducting the corporate credit management survey in China since 2003. The 2014 survey is the 12th edition. 882 companies from different sectors participated in the survey, between October and November 2014. The survey provides a better understanding of China-based companies’ payment experiences and their credit management practices.

[1] Survey conducted in the fourth quarter of 2014 by Coface

[3] Sub-standard loan: repayment on a loan is overdue by 91 to 180 days and no full-repayment can be made by the borrower, see Appendix 3

[4] CRA assesses the average risk of payment defaults by companies in a given country. This evaluation combines economic and political prospects of the country, Coface payment experience and business climate assessment. This evaluation has 7 grades: A1, A2, A3, A4, B, C, D and can be watch-listed 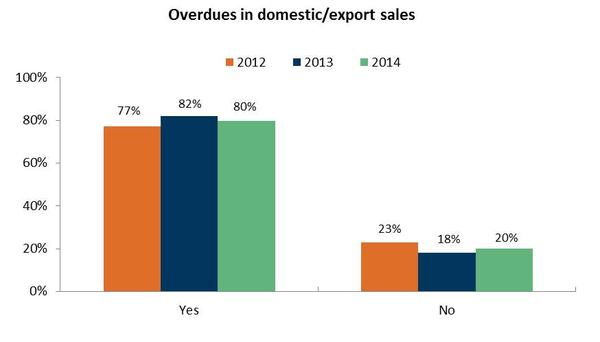 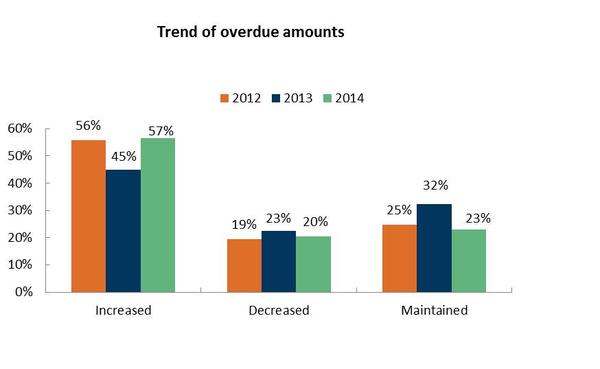 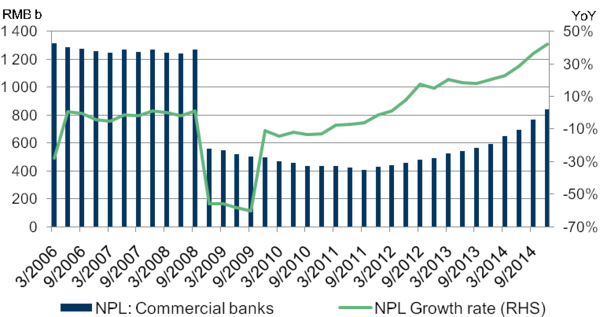 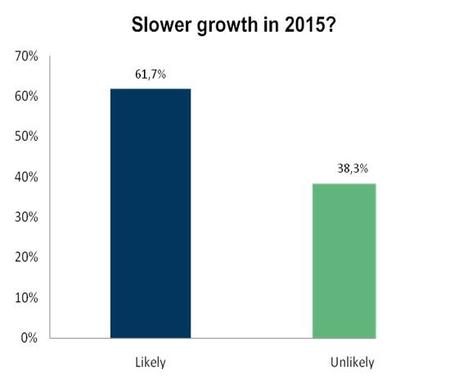 
HOW DOES CREDIT INSURANCE WORK?