Renewal of the mandate of CEO, Xavier Durand, for 4 years

Unless otherwise indicated, change comparisons refer to the results as at 31 December 2018.

“We have completed our Fit to Win plan with record results, despite a riskier economic environment. Our net income is up by 20%, to €147m. The tangible return on equity comes in at 9.1%, excluding non-recurring items. Record retention and a pick-up in new business boosted growth to 5.9%. Finally, in terms of capital, the French regulator authorised our usage of our internal model to calculate the solvency requirement. Our solvency ratio stands at 190%, up 21 points, which allows us to propose a payment of a dividend of €1.0 per share to the Shareholders Annual General Assembly.

Our new strategic plan will build on the many successes of Fit to Win, to continue the transformation of the company initiated in recent years. Our roadmap for the coming years will aim to strengthen Coface’s profitable growth and the resilience of our economic model.”

The Board of Directors of COFACE SA examined the consolidated financial statements at 31 December 2019 at its meeting of 5 February 2020. The Audit Committee at its meeting on 31 January 2020 also previously reviewed them. Accounts are non-audited, certification is in progress. 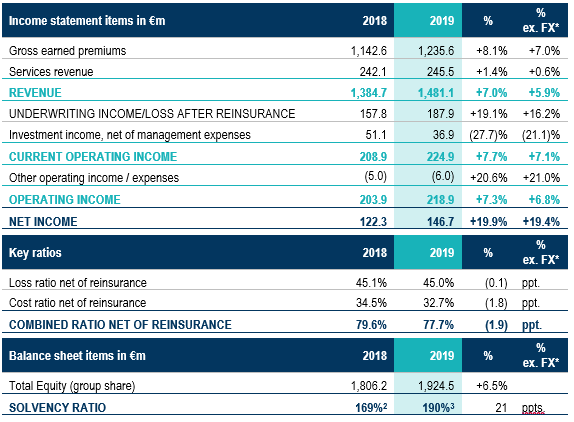 In 2019, Coface recorded a consolidated turnover of €1,481.1 million, up +5.9% compared to 2018, at constant FX and perimeter. On a reported basis (at current FX and perimeter), turnover increased by +7.0%. This notably includes the contribution of Coface PKZ, an activity that was integrated during the second quarter of 2019.

The growth in Coface's customer business had a positive impact of +2.8% during 2019. Although still positive, this growth rate shows a marked slowdown compared to the previous year (+6.1% for 2018). This slowdown was particularly apparent during the second half of the year. The price decline remains under control, down by (1.0)%, reflecting good commercial management and re-pricing in the riskiest markets.

The client retention rate was high in most regions and reached a record annual level of 91.6% for the Group. New business recorded a total of €133m, representing an increase of €17m compared to 2018. This increase was driven by renewed commercial momentum in the mid-market and stronger performance on large accounts.

Revenues from insurance activities (including bonding and Single Risk) grew by +7.0% at constant FX and perimeter compared to 2018 (up by +8.1% at current FX and perimeter), thanks to growth in our clients' activity, a high level of client retention and stronger commercial performance.

Revenues from other activities (factoring and services) rose by +1.4% compared to 2018. The fall in revenues from factoring in Germany, within a context of controlled margins and risks, was more than compensated for by the strong growth in revenues from services.

In Western Europe, sales rose by +3.8% (and by +3.4% at constant FX), thanks to record retention and a recovery in new business in France, as well as in the United Kingdom.

In Central and Eastern Europe, revenues grew by +10.6% and +2.4% at constant FX and perimeter, mainly due to growth in credit insurance. The increase at current perimeter is explained by the contribution of Coface PKZ, the activity that was integrated in Q2-2019.

In the Mediterranean and Africa, a region driven by Italy and Spain, sales rose by +6.4% and +6.7% at constant FX, thanks to strong commercial performance and growth in policyholders' activity.

In North America, sales rose by +9.5% on a reported basis and by +4.2% at constant FX. This increase was driven by growth in both client retention and new business.

In Latin America, sales increased by +12.8% at current FX and by +24.4% at constant FX, boosted by the signature of major international contracts. This increase is within a context of prudence on risks (due to economic and social turmoil).

Revenues in the Asia-Pacific region rose by +23.2% at current FX and by +17.8% at constant FX. 2018 was marked by high premium refunds (low claims experience). Restated for this effect, growth would be +10.8%, driven by a recovery in new business.

The Group’s reserving policy remains unchanged. Strict management of past claims enabled the group to register 32.2 ppts. of recoveries during the year. These levels continue to be higher than the historical average.

Coface is continuing its strict policy of cost controls and investments. The Fit to Win plan has enabled €48 million of savings, while maintaining high levels of investment. Costs rose during the year by +3.2% (and by +2.3% at constant FX and perimeter). This rise, when compared with the increased revenues of +5.9% (at constant FX and perimeter), demonstrates good levels of operational leverage.

In Q4-2019, costs rose by +6.1% (+4.9% at constant FX and perimeter) due to increased investments in the transformation of information systems, regulatory projects and some non-recurring items.

The gross reinsurance cost ratio was 34.4%, an improvement of 1.5 ppt over one year.

The net financial income for 2019 was €36.9m, including €10.1m of realised net capital gains (including depreciation).

Despite an environment that is still experiencing historically low interest rates, Coface has managed to achieve a higher yield on its current portfolio income, (i.e. excluding capital gains, depreciation and currency effects) of €44.6m (compared to €40.7m in 2018). The accounting yield[4] for 2019, excluding capital gains and depreciation, was 1.6% and is slightly up compared to the previous year (1.5%).

Within an environment of persistently low interest rates, Coface has continued with its financial investment strategy of focusing on recurring revenues and low volatility. In the absence of a forthcoming rise in interest rates, the contribution of the financial portfolio is likely to be lower in future years.

Operating income for the year grew to €218.9m, a rise of +7.7% compared to the previous year, mainly due to the fall in the cost ratio and the growth in revenues.

These changes are mainly explained by the positive net income of €146.7m offset by the payment of the €119.4m dividend, as well as positive adjustments to the fair value of investments (€78.0m).

The annualised return on average tangible equity (RoATE) was 8.9% for the year of 2019 and 9.1%[5] excluding non-recurring items.

The solvency ratio reached 190%, representing an increase of 21 ppts. This ratio has been calculated using the partial internal model and the new factoring methodology. It takes into account the drop of the reinsurance cession rates, which stands at 23% as from 1 January 2020 (compared to 26%).

Coface will propose the payment of a dividend of €1.0 per share to its Annual Shareholders Assembly, which corresponds to a distribution rate of just over 100%, in line with its capital management policy.

The end of 2019 was marked by the anticipation of the signing of a trade agreement between the United States and China, as well as elections in the United Kingdom, which made it possible to confirm the effective date of exit from the European Union. Leading economic indicators have also stabilised at relatively low levels, particularly in the manufacturing sectors. Financial conditions remain accommodative due to the action of central banks.

Persistent global imbalances and the rise in corporate debt continue to pose significant risks of increased defaults, especially in sectors undergoing transformation (for example, due to digitalisation or environmental factors) or countries affected by political shocks. Coface therefore confirms its economic outlook of a gradual slowdown in global growth and a further rise in the number of insolvencies around the world.

It is within this environment that Coface has completed its Fit to Win plan and developed a new strategic plan. This new plan will build on the many successes of Fit to Win and will continue the transformation initiated in recent years. It will focus on strengthening Coface's profitable growth and the resilience of its business model.

[3] Non-recurring items amounted to €(4.6)m and are mainly including €(4.0)m regulatory projects, €(5.3)m of restructuring charges partially offset by badwill for €4.7m