Financing businesses: the bond market is turning into a "spare tyre"

in several countries of Asia, Central Europe and Latin America

Strong growth in bond financing for companies in emerging countries

Since the early 2000s, corporate debt in the emerging countries has been on a constant rise, with significant acceleration since the 2008 crisis: the value growing fourfold between 2008 and 2017, corresponding to a nigh-on 25 percentage point rise in the GDP. Emerging Asia is the region most concerned by corporate debt (133% of GDP in 2016), largely caused by China.

Bank credit, in particular the credit granted by domestic banks, remains the source of funding favoured by businesses. However, the development of the bond market in the emerging countries is growing at a faster rate. The proportion of bonds in corporate debt grew from 14% in 2008 to 20% in 2016. Globally beneficial for companies and private individuals alike, this diversification of the funding source is bringing down its cost, increasing the capacity of loans to small companies and, lastly, encouraging investment.

In periods of bank credit contraction, as was the case in the emerging countries during the 2008-2009 crisis, then in 2015 and 2016, bond funding can offer companies some breathing space. The Coface economists have identified3 groups of emerging countries, based on an analysis of bond market growth during periods of bank credit contraction in the non-financial sector in18 countries.

Lastly,in China and India, no credit contraction has been recorded recently, and so it has not been possible to analyse any such "spare tyre" effect. 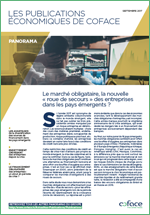 Download this press release : Financing businesses: the bond market is turning into a "spare ty... (300.16 kB)