Country risks again under tension in 2016

TO BE MONITORED: CHEAP OIL, FINANCIAL MARKET VOLATILITY AND THE CHINESE SLOWDOWN IN ADVANCED COUNTRIES AND GROWING DEBT OF COMPANIES IN EMERGING COUNTRIES

A NEW YEAR OF POLITICAL UNCERTAINTIES

A cautious approach to evolving country risks will be necessary in 2016. In an environment of soft global growth, forecast by Coface to be 2.7% (after 2.5% in 2015), the risks that emerged in 2015 are expected to remain this year. At the forefront are the political tensions gaining ground in both advanced and emerging countries.

The elections in the United States and, above all, the risk of a “Brexit” by the United Kingdom (two advanced countries that outperformed the eurozone in 2015), are likely to weigh on business confidence. In the emerging world, uncertainties remain high in the Middle East. The risk of terrorism could lead to stronger nationalist movements. According to Coface’s political risk index , Turkey and Brazil particularly stand out, due to their growing political instability between 2007 and 2015, following the significant deterioration of their economic situations. Brazil, whose political crisis and recession are expected to continue in 2016, thus saw its country risk rating downgraded for the second time in less than a year, to C.

Overall, advanced countries will see moderate growth in 2016, estimated at 2% by Coface. The main concerns include their dependency on commodity prices, the Chinese slowdown and financial market volatility.

The trend of low barrel prices should continue in 2016, due to the continued surplus of oil supply - in part attributable to Iran’s return to the market. Heavily affected by the drop in oil sector investment, resulting from the decline in its income, Canada has fallen from the best risk category and is now assessed A2. The continued decline in oil prices has, however, had a beneficial effect on households and businesses in certain advanced countries. With the exception of Japan and Italy, the fall in energy bills has helped to revive corporate investment, particularly in Spain and the United Kingdom.

Japan is also among the potential victims of the more-pronounced-than-expected Chinese slowdown, given that 18% of its exports are destined for China. Weak growth (estimated at 0.9% for 2016), the persistent risk of deflation and the indispensability of fiscal consolidation, explain the placing of its A1 assessment under negative watch. Not surprisingly, the decrease in demand and in tourism from mainland China will continue affect activity in Hong Kong and Taiwan, also under negative watch.

In the eurozone (with 1.7% growth expected in 2016), the situation of companies is gradually improving. This is evidenced by the insolvency statistics for France, Germany, Italy (a decrease of between -3.5% and -5% over the first nine months of 2015 compared with the same period in 2014) and especially Spain (-26%). Italian growth will be supported by domestic demand, which will benefit from the return of confidence and the progress in structural reforms. This has led Coface to place Italy’s B assessment under positive watch.

The situation for emerging countries, where growth has halved in five years (3.9% expected in 2016), is further complicated by the growing indebtedness of companies affected by both the drop in commodity prices and the highly expansionary monetary policies which followed the Lehman Brothers crisis. Only Central Europe remains unaffected at this stage. Hungary (whose assessment improved by one notch, to A4) and Latvia (B under positive watch)stand out for their solid growth, supported by household consumption, and for increased exports to European countries other rather than Russia.

According to Coface’s economists, Chinese companies are among the most indebted. Their debt represents more than 160% of GDP and 60 points more than in 2008. Following China are Turkey (+30 points), Brazil (+17 points), Russia (+14 points), and Malaysia (+11 points). Turkish companies, which have one-third of their debt denominated in US dollars, are proving to be among the most exposed to currency risks. The main glimmer of hope in the medium term concerns the gains in competitiveness resulting from recent depreciations of emerging currencies.

In this context of increased risks for companies, Coface is issuing a one-notch downgrade of the assessments of several emerging countries that were already under negative watch. These include: 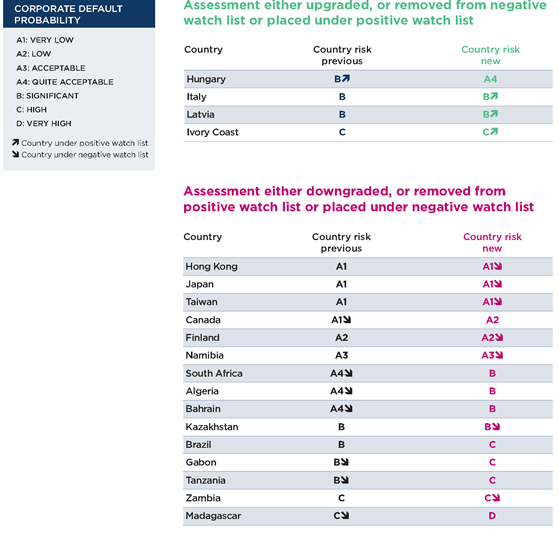 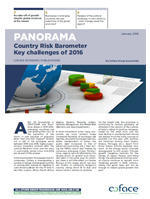