French companies are starting to benefit from a tenuous recovery, although certain sectors remain at risk

Growth has returned to France, but it remains fragile.

Coface economists estimate a growth of 1.1% for 2015 and 1.4% for 2016. Company insolvencies are down, although the level remains high. Companies are benefiting from lower oil prices and advantageous tax measures, to restore their margins and for modernisations. They are expected to continue investing in 2016, although this is anticipated to follow the customary pattern for a recovery phase.

Household consumption (1.5% in 2015 and 1.3% in 2016) will be the primary contributor to growth, although not reaching pre-crisis levels (2.1% on average between 2003 and 2007). Investments by companies are more positive, contrary to both public and household investments (down 0.5% in the third quarter). A sign of their improved financial health is that the rate of companies’ capital expenditure has been rising since the second quarter. In parallel, the drop in oil prices combined with government measures - such as the Competitiveness and Employment Tax Credit (“CICE”) and the additional tax amortisation allowance for business investments - have contributed to restoring companies' margins and have helped them to be able to modernise. Despite this favourable environment, export companies are faced with a rise in actual exchange rates and reduced access to the CICE.

In 2016, for the first time since 2012, investment (at 1.5%) will make a positive contribution to growth, but its rate of increase will remain below pre-crisis levels (3.8% on average). The production capacity utilisation rate (77.8% at the end of October) shows that companies are still not constrained by excess demand. Capital expenditure mainly concerns the modernisation of production facilities. The end of the "additional amortisation allowance for production facilities" measure, in April 2016, will play a role in reducing the rise in companies’ capital expenditure in the second half of 2016.

"Recovery is here, but it remains fragile. The growth in consumption is not high enough, at this stage, to convince companies to expand. 7 years after the Lehman crisis, investment will mainly be directed towards replacing production equipment. Faced with these weaknesses, continuous monitoring of the macroeconomic and sector-based trends remains essential for companies to anticipate their risks", noted Paul Chollet, in charge of sector and insolvencies studies at Coface.

A second year of lower insolvencies

For 2 of the 14 sectors studied, the level of risk is higher in France than in Western Europe:

French transport, assessed by Coface as "high risk" (vs. "moderate risk" for Europe), suffers from its lack of competitiveness in the face of competition from central Europe (road freight transport).

Construction is the only sector in France to have a "very high risk" assessment (vs. "high risk" in Europe). The turnover of companies in the sector has been declining since 2012 and, despite a slight recovery in 2015, the sector's volume of activity will remain limited. Civil engineering companies are suffering from reductions in local authority spending, while the labour market will remain weak and continue to have a negative impact on demand. 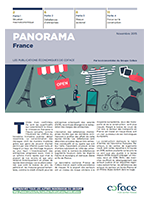 Download this press release : French companies are starting to benefit from a tenuous recovery, alth... (299.36 kB)