What we see in the Asia Pacific region

Coface (Asia Pacific) conducts surveys in 8 economies to trace the evolution in corporate payments. This report is designed to be a point of reference which gives readers an overview of the economic and industrial development in these countries. The study is supported by the results of the payment survey, as well as other macroeconomic and microeconomic indicators.

Some key indicators from the survey revealed signs of a slight deterioration. Firstly, overdues have become a more common experience for more respondents, with 69.9% of the respondents sharing experiences of overdues during 2014, compared to 67.7% in 2013 and 67.5% in 2012. Secondly, a slightly higher percentage of respondents reported that the average length of overdue periods was longer than 90 days. 14.8% of respondents stated that the average overdue period experienced was longer than 90 days, marginally higher than the 14.5% in 2013 (vs. 13.2% in 2012). In addition, 36.8% of the respondents men-tioned that overdue amounts increased over the last year, compared to 34.7% in 2013. This data may point to deteriorated payment experiences in the region.

Marked progression in corporate payment experience is to be found in Australia, which saw improvements in terms of i) overdue occurrences, ii) length of average overdues and iii) potential financial issues related to ultra-long overdues. In addition, we note that Taiwan and Singapore saw enhanced payment experiences in 2014, as suggested by improvements in 2 of the 3 aforementioned indicators. Insolvency trends and business closures in Taiwan and Singapore also remained at low levels, which further supports our view.

Several indicators suggest that corporate risk in Hong Kong may be on the rise. Firstly, in 2014, overdues became more common and more companies reported that average overdue periods extended to over 90 days. Moreover, cases of insolvency rose by 3.1% YoY in 2014, reaching a level that was last seen in 2010 when the city was hit by the waves of the global financial crisis, causing concerns on further deterioration. In addition, the city’s economic activities are tied to China and recent developments – including but not limited to the anti-parallel traders activities in Hong Kong and trends of Chinese travelers visiting other destinations – may negatively impact businesses in the special administrative region. Uncertainties are clouding Hong Kong’s economy. 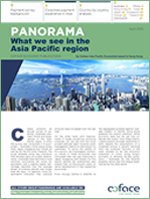 Download this publication : What we see in the Asia Pacific region (1.61 MB)


Press release: 70% of companies in the Asia Pacific Region experienced overdues in 2014